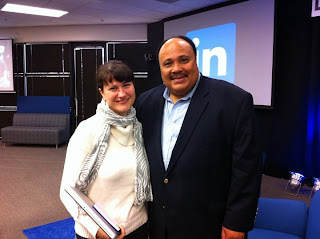 My 2011 began with a big change. I started a new job as User Experience Designer at LinkedIn. During my first week, the Speaker Series kicked off with LinkedIn's CEO, Jeff Weiner, interviewing Martin Luther King III and Bernice King, the son and daughter of Dr. Martin Luther King, Jr. and Coretta Scott King. Steve Cadigan wrote a beautiful post about the event on the LinkedIn blog, accompanied by video highlights.

Some of the insights that resonated with me most:


• "We lost a father, and the world gained a message." - Martin Luther King III
• Dr. King worked to eradicate what he defined as the 3 evils - poverty, racism and militarism. Today, his legacy is continued through The King Center, a living memorial dedicated to the advancement of his and Coretta's work.

• What are the practices that empower a person to make a difference in the world? Congruency between what you are trying to do and what you believe, discipline, focus, compassion and being prepared.
• It's not about you. It's about empowering the people around you. If Dr. King saw just 5% good in a person, he would focus on that and pull it out. He also created synergy between people with very different talents.

• Learn how to disagree without being disagreeable. Dr. King worked to position things in a non-negative way - not an enemy, but an adversary.


• "Maintaining optimism is the essence of my being." - Martin Luther King III
After the interview I had the privilege to meet and thank Martin and Bernice. Martin is a genuinely sincere, joyful and funny man. Bernice is a brilliant speaker with a warm, succinct style. I am so deeply inspired by the both of them. Simply being in their presence is a gift that I'll always be grateful for.
158 comments: Links to this post

My Best User Experiences in 2010

As a UX designer, I am hyperaware that my experience is not representative of everyone else's. The things that delight and annoy me are not the same for you. The following is a personal recap of the products and experiences that left an indelible impression on me.
Memorable classes and events I’ve attended:
F8 Conference
Creating a Mindset for Achievement presentation by Carol Dweck at BayCHI
“That resonates with me!” presentation by the amazing Nancy Duarte
The first Warm Gun, Designing Happiness Conference
Adaptive Path’s UX Intensive - Design Strategy with Brandon Schauer
“How to Think Like a Designer” Stanford class taught by Barry Katz, fellow at IDEO (read about classes 1, 2, 3, 4 and 5, 6)
Products/apps that delight me, educate me, help me discover things I like:
Boutiques.com is a Google product with a distinctly non-Google, fashion specific identity. It incorporates Like.com’s visual search technology to deliver a smart, stylish shopping experience. The power of Boutiques lies in (1) the effortless way I can provide feedback on what I like, don’t like, and why (2) the seemingly magical accuracy of product recommendations I receive based on just a few of my preferences (3) the high volume and consistent visual attractiveness of the product recommendations. If Boutiques catches on, Google plans to roll out similar products in different shopping verticals. Fashion and shopping competitors - watch out.
Facebook Login (Connect) on Etsy and Amazon are 2 of the best implementations I’ve used. Earlier this year I was the lead designer on Kaboodle.com’s Facebook Login experience. As part of our research, I fConected with dozens of sites to identify best practices. Personally, I found Etsy’s and Amazon’s experience superior because (1) they clearly communicated the benefits and addressed concerns upfront in their trusted brand voices (2) they delivered exactly what they described - relevant product suggestions based on friends and family’s Facebook likes. Both implementations helped me find holiday gifts that I had no idea even existed. Who knew there were cool LA Lakers and Depeche Mode handmade items on Etsy? My prediction for the future of shopping is that it will not be based on search, but will aggregate your location, likes/preferences, events and online activity to deliver a constant stream of relevant products that you validate to increase the volume and accuracy of the recommendations. Bring it on!
Quora is an A-List experience in UX/UI design, users, and the high caliber content they contribute. Some of my favorite questions of the moment include What’s the difference between UI design and UX Design? and Why is the such a stunningly short supply of designers in Silicon Valley right now?
Flipboard for iPad is my preferred way to consume Twitter. It elevates the content with beautiful typography and layout. It slows me down and lets me savor the words and ideas. It makes me want to sip a steaming cup of lemon ginger tea while reading. I just received a Kindle as a holiday gift. I haven’t had that kind of experience with it...yet.
Instagram for iPhone gives me 3 good reasons to look around and snap iamges (1) I can easily stylize my images to reflect my mood - edgy, nostalgic, playful (2) I receive almost instant validation from my Instagram addicted friends (3) it’s a stream of intimate visual storytelling from people I care about. No links. No articles. Minimal text. Just tiny, square, beautiful, shared moments.
Quotes that inspire me:
“To have an effect, you have to select.” – Jim Babbage quoting friend Kim Kavanaugh
“Anticipate the problems that your design solution creates and solve those too.” – Barry Katz


“The barrier to change is not too little caring, it is too much complexity. To turn caring into action, we need to see a problem, see a solution, and see the impact. But complexity blocks all 3 steps.” – Bill Gates on the benefits of using pictures to aid problem solving
“I fight for the USER!” – Tron

In the sixth How to Think Like a Designer class, Barry lead a discussion of the user research exercise that we participated in last week. We broke into teams of 2 and took turns interviewing each other about our work environment. We then identified key issues and brainstorm solutions. Some of the insights that came from the discussion of the exercise:
Be attentive to something that doesn’t fit. There's a tendency is to ignore the anomaly. It’s often the incongruous bits of data that that yield the greatest insights.
Make the most of your constraints. In class, we weren’t able to observe our partner in their work environment and we had limited time to conduct the interview. This is similar to real world professional practice, which is always constrained by time, money, technology. How do you know when you’ve dug deep enough? When you run out of time, money and/or technology (because technology is not available or does not exist). User research/interviews are a scalable procedure which can be applied over and over again throughout the course of the project.
Reframe the problem statement to discover the true issues Designers want to to be asked “what is your point of view on a wall?”, not “here’s a pile of bricks, build us a wall”. The danger of just building a wall without questioning why is that the solution may really be a window, not a wall. Around 2006, the DOE (Department of Energy) came to IDEO with a problem/question: why don’t Americans care about energy efficiency? User interviews turned into an inquiry into values which lead to the discovery: it’s not that Americans don’t care about energy efficiency, they just care about other things more – aesthetics (appearance of house and the appliances in it) and the safety and comfort of themselves and their family. The real challenge facing the DOE was to create energy efficient solutions that align with American values. The starting question presumed a set of values that was not correct. Read more about IDEO's process and solution here.
2 comments: Links to this post

Email ThisBlogThis!Share to TwitterShare to FacebookShare to Pinterest
Labels: Stanford

Design Thinking with Barry Katz at Stanford: Class 4 and 5

In the fourth and fifth How to Think Like a Designer classes, Barry invited an excellent guest speaker, Gabriel Trionfi, User Researcher at Facebook. Previously, Gabriel was a Human Factors Community Leader at IDEO. He has a psychology and theater background, which he taps into when conducting interviews and facilitating research. He's a warm, open, insightful guy - definitely someone I'd enjoy working with.

Gabriel talked about the state of most experiences, which by default, aren’t designed. When experiences are designed, not all iterations are accounted for (EX: most chairs are optimized for sitting, not slouching). Experience takes place within an individual - it's a psychological phenomenon. You cannot point to the experience you designed, but the thing that facilitates the experience. Designers can constrain experiences, increase the probability of an experience happening, but there's no guarantees. Ideally as a designer, you’re looking forward seeing how you can change what is, iterating to get people to the better experience, the optimal state.

Gabriel said the #1 thing a User Researcher does is to provide authentic, grounded, meaningful inspiration to designers. Inspiration is required for innovation. As a User Researcher, you need to have genuine insights about people and the opportunity to share those insights with designers to help them find a reason for the design to be. User Research is a set of practices that help you discover valuable insights.

User Research has many names and overlaps with multiple disciplines: ergonomics, need finding, human factors, usability, HCI participatory design. Believing in Human Centered Design doesn’t make you a User Researcher, or at least doesn’t make you a good one. (Note: Don Norman wrote a fascinating article about the Dangers of Human Centered Design). Design research is not objective. It is subjective because we intend to design something from the start. If you don’t pursue inspiration you aren’t doing it right. It's about change, fluidity, being reactive, following insights to an end vs marketing research, which is generally about how many dollars are associated with different types of users.

Email ThisBlogThis!Share to TwitterShare to FacebookShare to Pinterest
Labels: Stanford

In the third How to Think Like a Designer class, Barry started by sharing a story about an inspirational visit to a cutting edge recycling plant called Green Waste in Palo Alto, CA. He asked the class to guess what the #1 working hazard was. Breathing/lung issues? Carpal tunnel? No. 95% of all the injuries are needle sticks. Even though the workers wear needle resistant gloves, it's not possible at this time to completely avoid needle sticks. This ignited an impromptu brainstorming - use magnets to pull the needles from the piles, put RFID tags in needles so they can be scanned and seen, create more stick resistant gloves, provide needle repositories on public recycling bins, and more. The ideas ranged from changing the needles, to changing how they're identified, to changing the way they are discarded in the first place.

How far up the chain do we go when we look for a solution? It depends on the careful defining in the brief. Design solutions can behavioral, technical, social or legislative. Defining a brief is an art. The client often comes to the designer with "This is my problem." The designer needs to say, "No. You think that’s your problem. This is the real problem." Guiding a client to the proper posing of the issue in the first place is often the most difficult part of the process.

Barry talked about the 7 year itch phenomenon in the industry. First people were all about design methods, then design management, now it’s design thinking. It’s a sign of a profession that is continually renewing itself.

We then resumed where we left off last week on the origins of design thinking:

Lea Ann
I'm a User Experience Designer with expertise in branding, creative direction and visual design. My passion is UX and product strategy for social and e-commerce experiences.

This is a Flickr badge showing public items from the UIPatternFactory.com group pool. Make your own badge here.